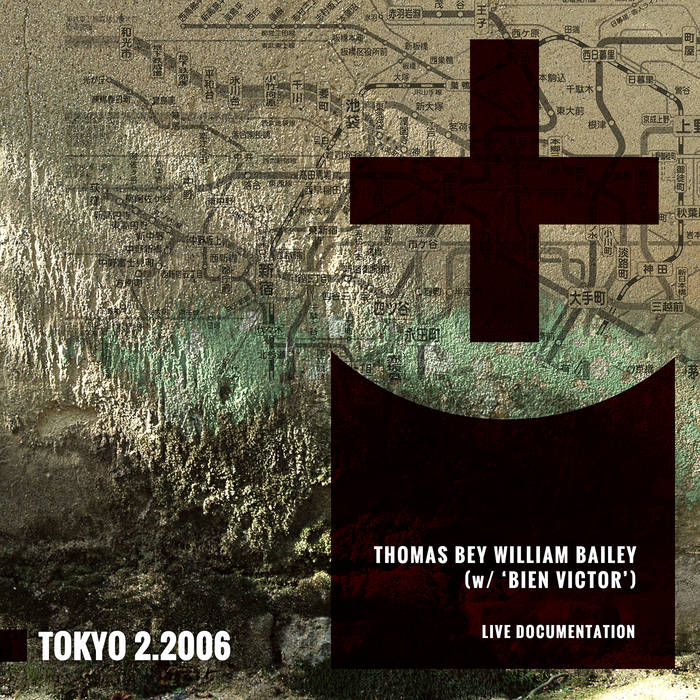 This recording is being included in the “live archive” series because, though it was recorded in the a tiny studio room somewhere in the Mizunokuchi neighborhood southwest of Tokyo’s mega-urban core, all that you hear here was improvised on the spot in a single take. I have an entire minidisc’s worth of these sessions, approaching maybe 2 hours’ worth of material, although the selections here are the most cohesive in terms of overall direction and temperament. In particular, these trio sessions were highly “krautrock”-inflected and neo-minimalist, with more than a few nods in the direction of Tony Conrad / Faust (maybe some Origami Arktika for a more “modern” reference).

Players on this recording are myself, Toronto music / film scene gadfly Brandon Hocura, and Jason Funk of Irving Klaw Trio, Helll, Hochenkeit etc. We were provisionally titled ‘Bien Victor’ for this recording by Brandon - always with a French cinematic reference of some kind to toss out - and the results were originally made available by me as a CD-R with the understanding that each individual member could make their own artwork, set their own limitation on copies distributed, etc. What became of any copies not personally distributed by me, I really have no idea, but here again are the original recordings (though the leadoff track here is presented in an expanded version, the original was about 7 minutes shorter).

This is maybe the last documentation from a period, about 4-5 years in length, in which I was more interested in live collaborations than in putting anything to record - anything conceptual or thematic was on hold until after I returned to the U.S. *That* time, given it was a time of relative isolation and years-long grappling with personal health problems not to be related here, ended up cementing my status as a “solo” artist working within the very definite idiom of “sound as psychic research” that I’ve continued to work in ever since.

Before all that came to pass, though, I very much enjoyed the opportunities that being a multi-genre “gun for hire” presented to me. Even though most collaborations, this one included, were “one-offs,” they were necessary in helping clear the path towards the essentialism I now try to follow (see, I was into “essentialism” before it was asked of me, at gunpoint, by the authorities managing the global pandemic lockdown!) As such I don’t view anything I have done with friendly collaborators as a “side project” or a diversion of any kind, and nor should any artist who works with multiple aliases etc. - insofar as live, public presentation of audio art is a means of finding what aspects of your identity are worth projecting into consensus reality, these exercises should be conducted with the same level of dedication that accompany any so-called priority project.

Sure, this document does feature some mistakes and elements that would certainly be edited out of the kind of final products I typically release / publish. All told, though, I enjoy this one as a solid example of instrumentally stretching out while avoiding the quagmire of “jam band”-isms or bad psychedelia. Thanks to Jason and Brandon, wherever you both are, for taking me in and letting me join in this session of soundbath therapy during a time where lots of walls seemed to be falling in on me. There may still be more like this one, we will see…

Thomas Bey William Bailey is a researcher and author of several books (e.g. "To Hear The World With New Eyes," "Micro Bionic") as well as a dedicated sound artist: in whatever medium he chooses, he focuses upon the extremes of information in order to determine both their liberating potential and their hidden dangers. ... more

Bandcamp Daily  your guide to the world of Bandcamp